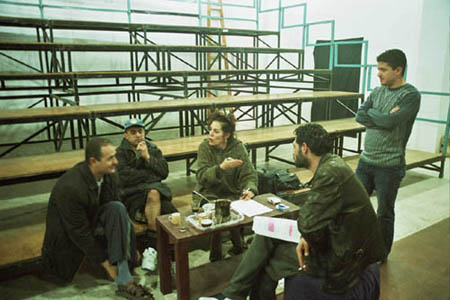 A New Play
Creativity is inventing, experimenting, growing, taking risks, playing with rules, making mistakes, and having fun. The Swing began as an experiment! And all those who made it invented, grew, took risks, played with rules, made mistakes, and had lots and lots of fun! The actors began working in January following an intensive learning trip to Poland. Their task was to make scenes on the idea of neighbours who live in political turmoil. We wanted a universal theme, something people in other countries would understand, and something we – as Palestinians – could share – with other cultures. The first part of the experiment resulted in an angry play! Of course we are angry! But we are also artists… And art gives you the freedom to look at an idea in a million ways. So we continued with our experiment. We tried again. We kept looking. It wasn’t easy. But because we allowed ourselves to experiment, to play, to look for something new, we found a new idea for our neighbours. The Swing looks at the life-time of 3 people… Who grow old before your eyes.

The Music in the Play