After reading a poem called “Thirteen Ways of Looking at a Blackbird” by Wallace Stevens, Jackie Lubeck came up with the idea of “Ten Ways to Know Us” which is a research on how Palestinian kids and drama teachers, and directors, would like to talk about Palestine from ten different points of view. Ten themes were chosen and were worked into scenes for a project of the same name (See “Ten Ways to Know Us.” For the summer games of 2015, we turned six of the scenes into plays which were shown to 150,000 school children throughout the summer. The plays are (1) “Three Birds” (2) “Snow Trip” (3) “One Thousand Questions (4) “The Boys Who Can’t Sit Still” (5) “Between the Sea and the Desert” and (6) The Boys in the Mirror 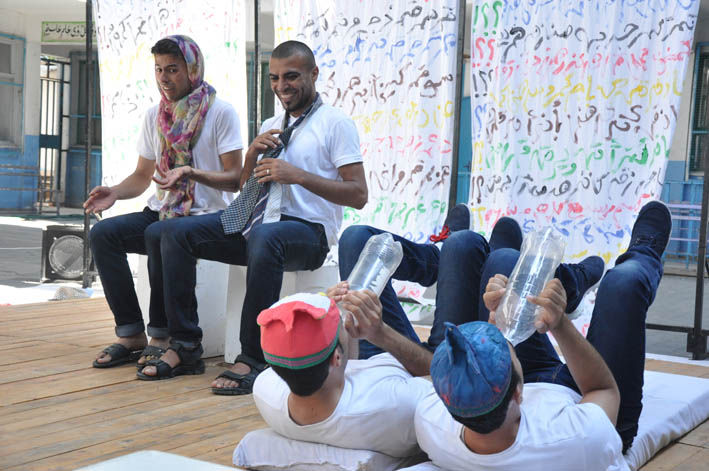 Meet Im and Abu Ahmad, a mother and a father very much in love. The mother gives birth to twin boys. The father thinks this is most odd but simply marvelous. As the boys begin life, questions come with their very first breath. Where are we? Who are you? I’m wet? Why are you over there? Who are those large ones kissing us? As the babies grow, the questions change. What do you mean a bottle? Did you see my sock? And they grow. Numbers? Who is that one yelling? What is a friend? The twins grow with each scene, asking more questions until we meet them as young adults, good boys but each with more questions that ever before. Do we fight? Do we leave? How do we make our home better?

The Actors
The play was made by 3 groups performing simultaneously in different locations.

Picnic on the Battlefield (Gaza 2009)