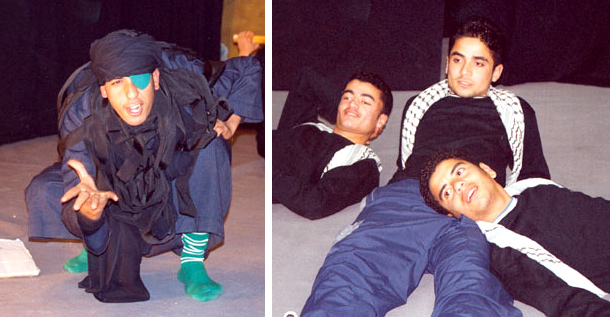 We find it quite ironic that the opening of the play was scheduled for March 20, 2003. The press release read “Opening of Play Coincides with Opening of War in Iraq!” We were panicked that the whole project would be cancelled. This was not the case. It was with a burst of happiness (following of day in which the whole world was watching television) that the audience of Deir Balah came to the opening of “Secrets of the Cave.”

Suppose … You are young … And the world around you is filled with injustice and misery … Suppose … You feel you must do something … That you are someone … And not just anyone … Suppose … You talk to your friends and say hey … It’s enough!

“Secrets of the Cave” was chosen because it looks at one of the most popular complaints in our society; that of the huge difference between the people who ‘have’ and the people who ‘don’t have.’ Written in the style of a folktale – where evil fights goodness and where poor but clever youngsters challenge the injustice of the rich and powerful – the play is set in a magical and unrealistic past. The theme, however, is timeless and universal. Three boys try to discover and uncover the work of two cheating merchants who keep all other people poor and miserable. The three boys decide that by working together they can make changes in their society. They decide not to believe everything they hear and not to surrender to illusionary tricks and most important they insist on being taken seriously. Comedy and slapstick are used as means of dealing with corruption and the forces of evil that effect our lives without us knowing. (Rehearsal halls were changed when we discovered one afternoon that the hall we had been working in had been bombed overnight. No one hurt.)

About the Group
The 9 boys working in “Secrets of the Cave” all come from the Deir Al Balah Refugee Camp. This is the first time TDP works with a group with such a wide age range as they are between 16 and 21 years old. Their interest in theatre began last year when a few of them participated in a drama workshop that took place in the camp. Liking the work, each one brought a friend along and, in a meeting in a café on the beach in Deir Al Balah, they decided that they wanted to make a complete play. They contacted TDP and a few months later we began. This is what they had to say:

Mahmoud Al Naji (12th grade) – There is a link between me, the people, and the outside world. In theatre, I can express my problems and my talent. I hope we can make another play after this.
Marri Bashir (11th grade) – I want to get my message across to the young and the old; that’s why I love theatre.
Abdallah Al Jourani (2nd year university) – From when I was young, my dream was to be an artist; art carries messages.
Wissam Abu Ashey (1st year university) – I like all art. I worked before in making plays; something pulls me towards being an artist and an actor.
Adham Al Sirhi (10th grade) – Theatre fills my life. Now, because we don’t rehearse on Fridays I am lost and I don’t like it.
Majed Al Aqkra (3rd year university) – Theatre is the easiest way to get a particular idea across to the people.
Saadi Joudeh (electrician) – I like theatre a lot a lot a lot, and I want to be a big actor … big … big … big …!
Mahmoud Al Jourani (has a job) – I want to make plays so the whole world will know our reality.
Ammar Sleiman (football player) – I like theatre because … I like theatre. 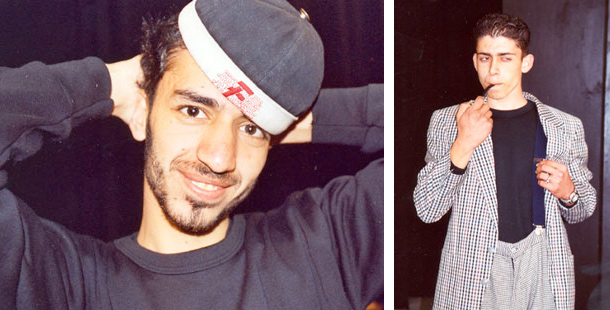