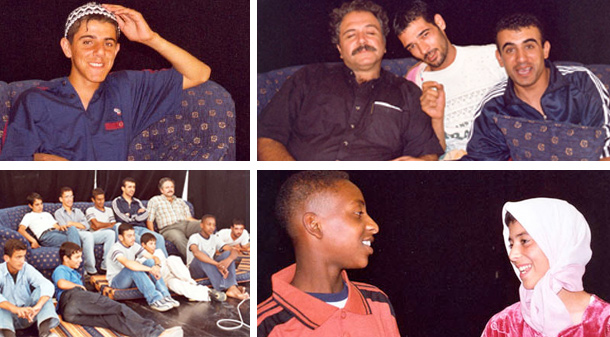 “Abu Saleem’s Sons” is an original text based on stories collected by TDP actors, drama teachers, and participating kids. While listening to the stories of many teenagers, TDP teachers got the idea to make a play about the problems of five sons and their father. Their situation is sometimes comical and sometimes tragic. The question is whether the play touches on the living conditions we find ourselves in, closed off from the world and from the rest of Palestine… or if the play is about the generation gap which all sons and fathers face throughout the world?

This was the challenge. We worked in a new location on the outskirts of Hebron in the city of Dura. Most of the kids involved had never been out of Dura. It was a first for us… and definitely a first for them. This is also the first play made in the series that was completely based on the improvisations of the kids… and therefore there is no fixed script.

The Boys in the Play

The ten boys acting in “Abu Saleem’s Sons” all live in Dura. They are between the ages of 11- 15 years old. Before beginning work on the play, they participated in a drama workshop as part of the summer program of the Ministry of Education in Dura. It was following this workshop that they decided to continue with TDP on a longer version of what they had been working on.

(Final version to be written by Jackie Lubeck)

Rashed Adwan (8th grade student; Dura Boys School) – I came here because I want to learn theatre and to know more about my friends. I know how important theatre is because it taught me how to concentrate.

Saed Al Amro (8th grade student; Ibn Sina Boys School) – I came her because it’s the first time that we have a thing like this in our area and I like what the teachers are giving us and I’m having a lot of fun.

Mutassem Al Darabee (10th grade student; Salah Eddin Secondary Boys School) – I came here during the vacation to spend time and to have fun and I continued because I liked the people. Now acting is one of my hobbies. I don’t know if I’m good at it or not. I like to continue because I feel that acting talks about the problems that we face and it teaches us how to be patient.

Saddam Amro (8th grade student; Ibn Sina Boys School) – Through theatre I can express myself and I like to talk about my feelings… and to do this in front of the audience is different from any other way. I have met new friends and the group is great with each other.

Abdel Jawwad Al Arab (10th grade student; Salah Eddin Secondary Boys School) – I like theatre and I dream to be an actor. In acting, I talk about the problems I feel and I think about what nobody else feels. Through theatre people can know that we are human and that we have feelings.

Ali Al Awoudeh (10th grade student; Salah Eddin Secondary Boys School) – I like to experience everything. I like our (drama) teachers. They want to teach us everything they know and this makes me concentrate and now I’m learning when to laugh and have fun and when to be silent and listen.

Musa Abu Sharar (10th grade student; Salah Eddin Secondary Boys School) – I have some problems in my life. In the theatre I can express my feelings. I take the tiredness and sadness off my heart. It helps in building my personality.

Mohammed Amro (10th grade student; Salah Eddin Secondary Boys School) – I came to the theatre to express what I feel inside. I found out that acting has many things in it… things that I can’t do at home or in school, things that can only be done on a stage. And I wish that the people will come and see the show and understand the messages we are trying to send.