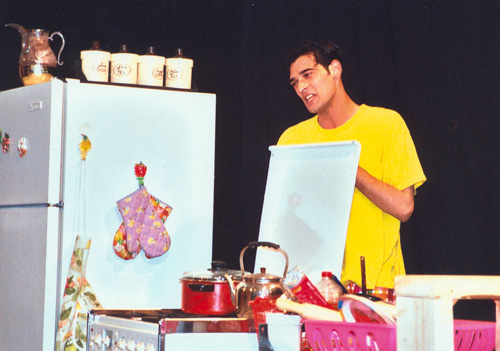 We’re hanging around in the kitchen. Waiting for father who doesn’t seem to be coming back. We’re playing cruel little power games with each other. Big Boy on Fafat, Fafat on Little Brother. Big Boy does what he wants, he’s dad’s successor. Fafat resists his power but how can he get back at him. Mom isn’t around. We can’t even talk about her. Father’s image isn’t so clear anymore. Who is that guy? Us, we’re brothers. We’ll do it better than him.

Abu Jamoos left a note on the table. “Be Back Soon.” His 3 sons are left alone. How long is ‘be back soon’ and what if he doesn’t come back at all?
Made up of the fantasies that kids inevitably create when left on their own, the boys design a world of questions and then try to figure out the answers. Boys, brothers, cowboys, and soon-be-men, they compete with each other for the role of ‘father’ because without a father there is no family.