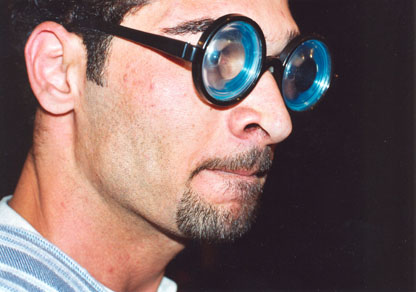 (An experimental play based on improvisations by the actors)

A house-painter, a policeman, and a travel agent’s helper.
Husbands, sons, fathers.
Three men.
In Hebron.
Three.
Out of 450 thousand inhabitants in this big old city, 3 of them, fall in with a group of theatre-makers.
For 7 years, they will work and produce, they will rehearse and show. They believe.

One day, in a pile of fights and frustrations, desperation and isolation, they begin to fall.
Their city is a stranger to them. Their work, a stranger to their city.
Their families ask, “when this child’s game will end?”
Their mountain is crumbling. They slip and they slide, trying to avoid the ever-present question: what do you do for a living?
What do they do for a living?
They pretend to be who they are not, in a pretend world with pretend objects.
GROW UP. Stop your fake realities.
NO. There is a point.
And now… years later, they must prove this point…. to themselves, to their city, to their children, to their wives, their parents, the neighbors, to the shop keepers, the street cleaners, the salesman, and any and all of the passers-by who say hello, how are you, what’s new? This is why we do it.