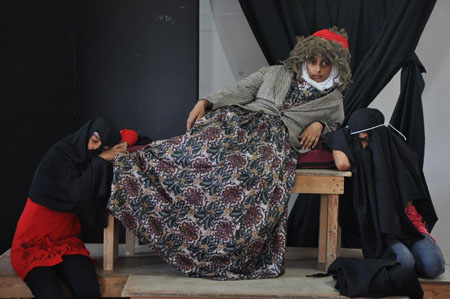 “Inside Outside” began as a drama workshop. It then was performed in the Drama Festival. Because of the kids and subject, we decided to do a short tour of this Kids for Play that deals with one of the most important subjects in Gaza regarding girls and women.

The theme of the play is the phobia of parents of letting their daughters go outside. In the story,   a widow lives with her daughter. The mother refuses to let the girls out even as the girls are looking through the windows at the world around them. They overhear girls talking about a beach. They want to go and with some shouting and yelling they convince their mother to take them. They arrive at the seashore in a tent. They go into the sea in the tent. They swim in the tent… Until a great wind blows across the sea taking the tent with it. With the mother on the shore, in hysterics, the girls are finally swimming openly in the Gaza Rivera.

The actual play happens in the house with the daughters overhearing girls on the street talking about their lives and experiences.