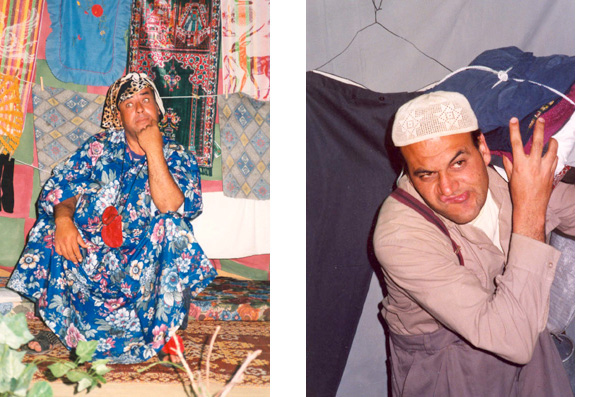 Mtawa: Oh people! Oh gypsies! Oh Hafiza! Why can’t you throw the garbage in the containers? Why out? What’s up? Eh!

Hafiza: Oh Mtawa! You call this garbage? It’s nothing. Just a little bit of dirt form the house! Would you like tea?

In cooperation with the Gaza municipality Solid Waste Disposal Project, “Hafiza & Mtawa” is a collective creation based on improvisations around the theme of ‘garbage’ (literally and figuratively). The play was commissioned by the Municipality of Gaza during the clean-up of 1994-96. As TDP does specifically make “educational theatre” we took the job to teach our actors and drama-teachers how you can turn an event of a supposedly purely educational nature into one with creative value, with humor, introspection, and also education. With the play made and the sponsors laughing in Gaza, the Solid Waste Project people in Rafah, Khan Yunis, and the Middle Region became involved. Over 100 performances of “Hafiza & Mtawa” were shown.

Hafiza and her neighbour Mtawa became small folk heroes in the refugee camps where most of the kids who saw the play live. For these kids and their teachers, meeting the 4 typical Gazan Palestinian characters in the play (Hafiza has a son and Mtawa has a daughter), speaking their very Gazan dialect, they were truly able to look at themselves, to laugh at themselves, to like themselves, and also to learn that throwing garbage out the window isn’t a good thing. The making and touring of “Hafiza and Mtawa” was an important step forward for the Gaza group. They were working, they were reaching the community, and the community was with them.

Written by Jackie Lubeck
(based on the improvisations of the actors)