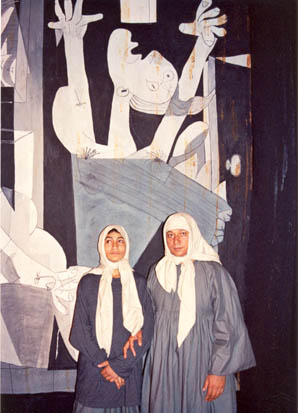 The play you will see is the result of combined ideas of different artists working over different times in history on the dramatic theme of senseless military bombardments that target the innocent citizens of the world. The Basque town of Guernica was destroyed and thousands of its inhabitants killed when fascist armies bombed the town during the Spanish Civil War. Theatre Day Productions has used the well-known painting of Pablo Picasso – titled “Guernica” – as the background for this theatre play for youth. The play follows the dramatic line and style of Spanish playwright Fernando Arrabal’s play – also titled “Guernica” but has been rewritten for a youth audience.

The painting was created in 1937 and the play was written in 1959. Here we are in the year 2001 and war is still all around us. As Palestinian artists working with and for children, we are deeply concerned about the effects that this violence is having on our audience.  We ask ourselves, “If the children are living a war, should we make a play about a war?” We decided that yes, if the children are victims of war, then we should have the possibilities to discuss this war with them.

Guernica & Youth
Through the drama workshops that TDP carries out with children we have been trying to find out how to deal with children who have completely changed their way of speaking, thinking, and even dreaming during the Al Aqsa Intifada. In these workshops, children demand to be allowed to play out scenes of war and death that they are confronted with on a daily basis either from real-life experience or from television and media reports. We have discovered that by giving the children a chance to express themselves regarding this violence, to tell the stories they need to tell, only then will they be able to move on to other subjects that also occupy their thoughts. Besides the drama workshops of TDP, in which we listen to, and work with children, our most important tool in reaching children is through our theatre plays, in which we can ‘talk’ to them. We don’t talk to them in fairy-tales or childish stories but rather as adults speaking to intelligent young people. All children everywhere need to have the feeling that they are taken seriously. This is especially true of Palestinian children who have the burden of having to grow up fast because of war and the resulting family and economic responsibilities. TDP wants to deal with this past year of bombings and violence and to be able to open a dialogue with the children about this war. This dialogue will happen during the performance when the children watch our play and afterwards when we have a drama workshop with the kids in the audience.

About Style and Humor
The style of the  play is absurd and as such it doesn’t tell a regular story. However, its absurd story-line, images, and anecdotes allows the children to make free associations with their own personal histories and stories. Where was I during the bombing? How did I feel? What would I do if I was the character in the play? Can I admit that I’m afraid? What is my role as a 13 year old child growing up in this country?
In times of war, people still find ways of going about their daily lives. Humor is a part of that. If we lose our humor, we lose our humanity. Life does go on and TDP helps in that process in the way we know best: Theatre.

“A picture is not thought out and settled beforehand. While it is being done it changes as one’s thoughts change. And when it is finished, it still goes on changing, according to the state of the mind of whoever is looking at it. A picture lives a life like a living creature, undergoing the changes imposed on us by our life from day to day. This is natural enough, as the picture lives only through the man who is looking at it.” (Pablo Picasso)

“I have always believed, and still believe, that artists who live and work with spiritual values cannot and should not remain indifferent to a conflict in which the highest values of humanity and civilization are at stake.” (Pablo Picasso)