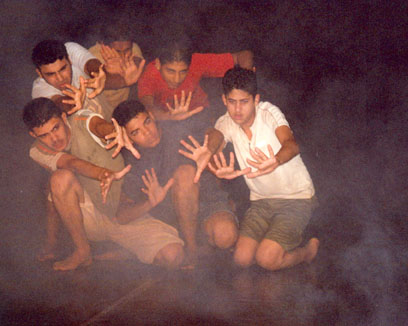 Six boys… In a tiny space…
Are surrounded by enemy tanks and troops.
Through the keyholes of their locked room, they watch the war. They are all the people in the war and the people in the war all live inside them. They are angry, afraid, hopeful, and dreaming. They are comrades and fighters. Their weapons are in their imaginations. We ask: Are they insane? What is wrong that – on this speck of a place in the world – we are forced to carry so much of world’s violence and hatred?

The Actors  (using their real names)
Islam Al Khatib …  Art matters!
Ali Muhanna …  People only look at your outside.
Ahmad Sirhan …  By playing it, I finish with it.
Mohammed Abu Zriba … They steal the sun, hide the moon, and no one asks why.
Mahmoud Dreemli … I talk!
Mari Basher … We make honest and daring plays.
Mohammed Al Hissi … When will insanity end?

About the Boys
The 6 boys playing in “War Yanni War” have all made plays with TDP before, some beginning as young as 12 years old. Each of them has different experience with TDP. Their past plays? “The Lost Treasure,” “Al Waseet,” “Majnoon,” “Secrets of the Cave,” and “Boys in the Sun.” This committed group of young people, with a love of theatre… and a talent for it, plays an important role in the development of TDP projects.