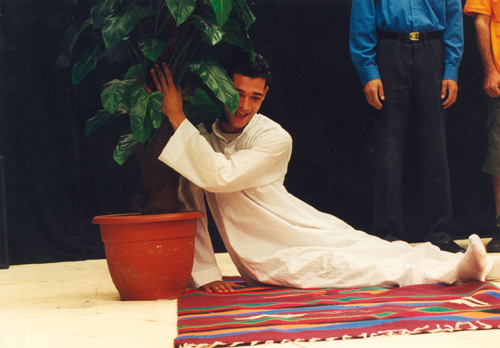 “The Other Half” is three stories about three teen-age boys, each of whom discovers his own way of life in a world basically unfriendly towards disabled people. Faris, paralysed from the waist down, was parked next to a plant at the age of 2. He spent the first 12 years of his life watching the plant grow. His sister taught him how to read and write. She gave Faris the push to take his life into his own hands: To consider his situation, his options, and to put his very philosophic mind to work. Mohammed is an optimistic boy. He has only one problem: He doesn’t have a single friend in the world. On his morning newspaper route, he meets a man. A possible friend? Hardly. “Those people are not my problem.” In a comedy routine between a boy in a wheel-chair and an egocentric little no-man, Mohammed discovers the regular problems of friend-making. And then there is Abdallah, crooked and limping, hidden in his house by over-protective and embarrassed parents. He yearns to learn how to read. He figures out how to do it… that and much more.
How We Made the Play –  “The Other Half” is first a play about 3 teenagers with physical disabilities. In their own way, they fight for a respected place in the world of ‘other’ people. They have feelings like all other young people. They want to work, they want to travel freely, and they want to express their opinions. In order to make this play, we met and visited with many young people all of whom were born with physical disabilities or who became handicapped when they were very small children. In meeting these people we were able to hear about their personal lives and be inspired by their passions and problems. We heard stories, and more stories. And, when we finished the play, we found out that the story of our 3 ‘heroes’ is not only about 3 disabled ‘heroes.’ The play is about the desire of all young people to take their place in this world, to find their own strengths and their own way. They try, they make mistakes, and they try again. They jump, they fall. They laugh, they cry. They think alone, they plan with others. They confront and disagree with adults. It is all a necessary and natural part of growing up and of becoming free, self-conscious, individuals. 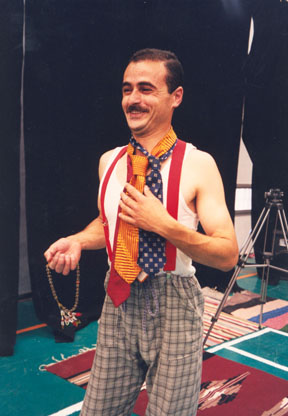